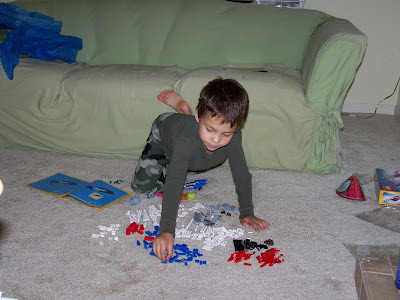 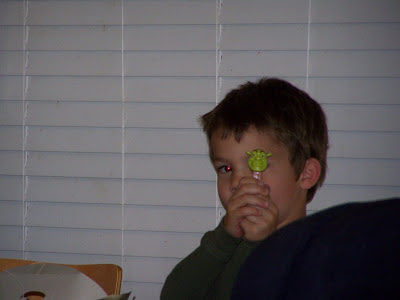 Birthday morning tradition - everyone gets a Pez 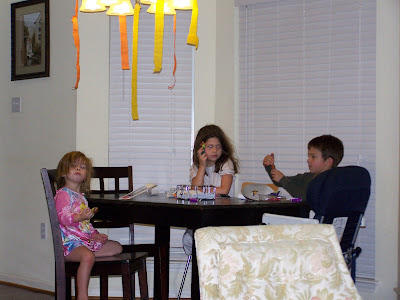 He's technically outfield, which in t-ball is somewhere between shortstop and 2nd base - his team is the Atlanta Braves 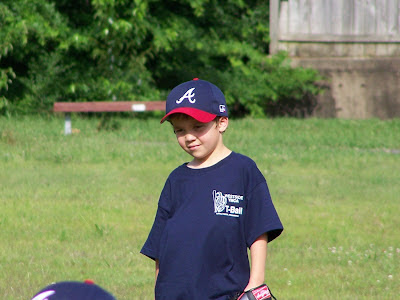 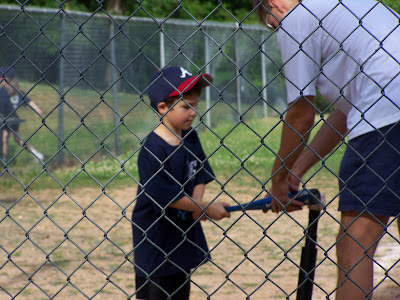 Riley plays on the playground until Logan's at bat then comes to watch and cheer for him...she's very supportive! 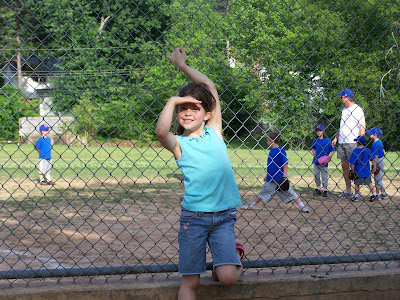 She slept laid out on the grass the entire game 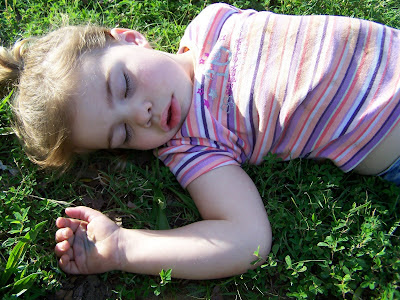 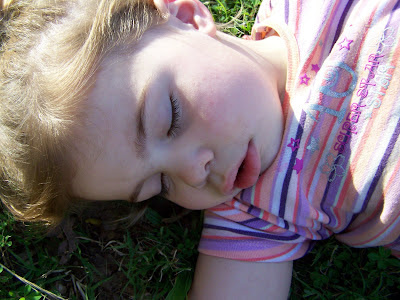 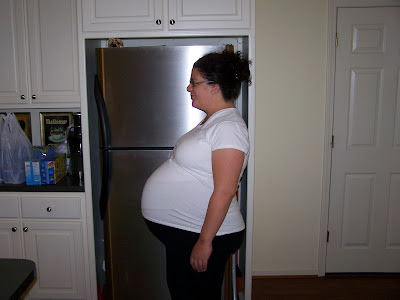 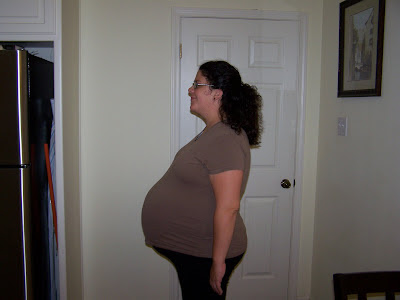 Etta in the middle

This is what she does while we sit on the porch with morning coffee - and she sort of yowls for attention the whole time. Not barking, just yowling. 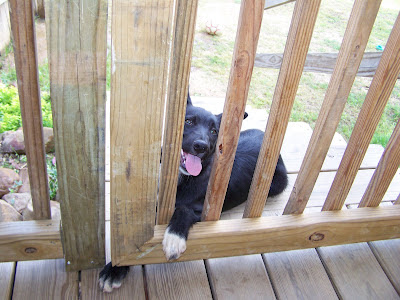 This is what we always called her "cheesemonkey" face. 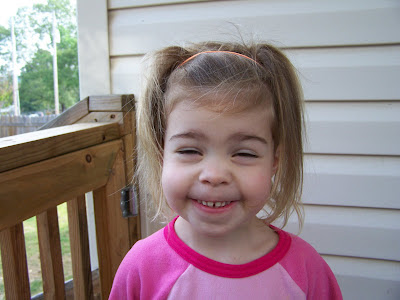 I've tried - really, I have - to refrain from comments about her intelligence, but this isn't the first time she's done this. 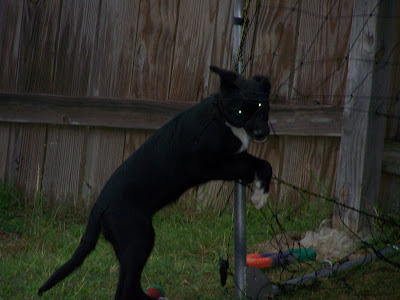 The picture below is 34 weeks (this morning.) I can't move anymore. Well, barely. The little rugrats are moving like crazy people - elbows and knees everywhere! Monday night our care group, college group and elders' wives hosted a baby(ies) shower for us. My friend Hannah (aka "official photographer of the evening) posted pictures on her blog. It was great - lots of friends, food, and gracious gifts. Jeff & I were overwhelmed with the generosity of our church!

We brought home some of the goodies, and Logan informed me that "baby shower cake" is his favorite kind of cake. He's always a little bummed about not being invited to these girlie events. He got to watch selected parts of Spider Man with Dad though, so the guys had fun too...

Em - Momma, can I take my penny and get a snack from the snack machine? (at the pool)
Me - No, a penny isn't enough. I'll give you a granola bar.
Em - But I don't like chocolate!
Me - Em, everybody likes chocolate!
Em - Except me! 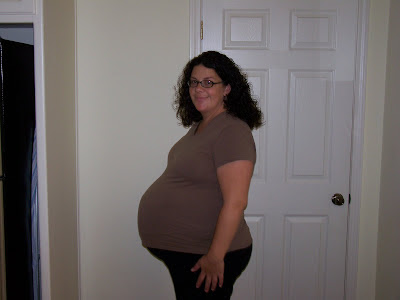 The other day I pulled a lasagna out of the oven and put it on the table for dinner. Emmie's first response "Oh, Momma! Who brought us the basagna?" She no longer assumes that I would have made dinner all by myself...

She just ran in here to me (I'm in what Jeff calls my "nest" on the couch) and I asked why she doesn't want to watch the Wallace and Grommit movie the other two are watching. She answered, "It's too dark, and it's full of humungo bunnies!" Then she called them "wallet and gramnut". I love my little crazy girl.

Regarding the two pictures of coffee posted below: they are both "half-caf" aka half decaffeinated. Just so the pregnancy police rest assured. I think I blogged about the Starbucks guy who asked "are you sure you should be having that?" when I ordered an espresso a few months back...

Also, Jeff actually does make these. When I came to the point of saying "if you want an espresso I'll teach you how to make it but otherwise I can't get up right now" he decided to learn, and has become quite proficient! We discovered this drink at starbucks but actually like the ones we make better. This is my favorite thing in the world right now. I think. I'm hoping that even when I'm back to whatever normal will be after I have the twins he'll still make these for me.

Tomorrow I'll be 33 weeks, and I'll have Jeff take a lovely sideways picture before I waddle off to the doctor in the morning. It's a mix of laughable and astonishing when I see my image in the mirror. I went out today for the first time in a couple of days, and had I don't know how many people ask how many babies I was going to have. I suppose at this point it's obvious it's not just one?

We had an ultrasound on Monday and "Baby B" (about whom I am tempted to make certain predictions) completely turned upside down while the tech was trying to measure him. He has refused to cooperate during several ultrasounds in a row now, and I'm beginning to think he's a little rascal...hiding his face, running from the ultrasound thingy, kicking me to make me pay for his being disturbed. They were estimated to be about 5 pounds each, growing just about equally. My doctor keeps saying "you know there's a good chance they'll be identical." We'll see. If so, I might have some sort of identifying tattoo placed on B just so I know...just kidding. We still need to name them! It's anyone's guess at this point what they'll end up named. Nothing feels right to me yet.

They "hang out" while Riley plays soccer. 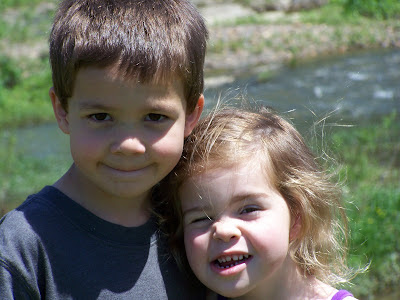 No special occasion, I just like it when they're getting along so well! 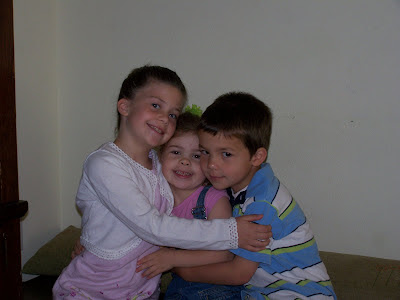 Which child likes the camera? Go on, guess. I know it's hard to tell... 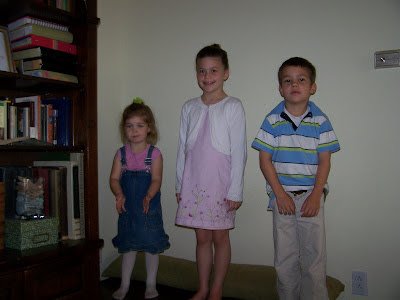 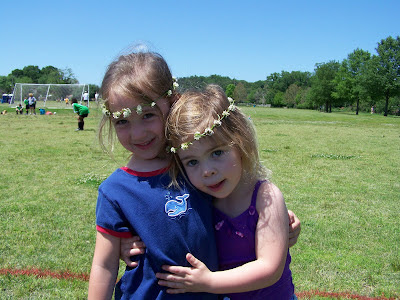 they charge you more at starbucks and these are better! 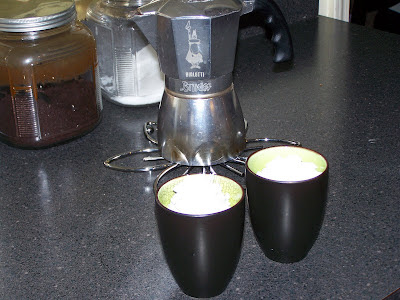 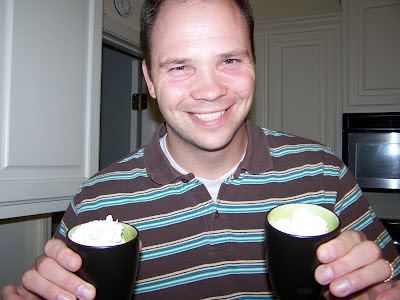