Emmie just told me a knock-knock joke. It went something like this.


Logan just started a sentence by saying "From what I gather..." He's a little thinker-boy.

Today Emmie answered me by saying "Yes Mammy! Yes Mammy!" I'm a little scared. Maybe we've been in the South too long.

After much rolling down the hill, she took a break. 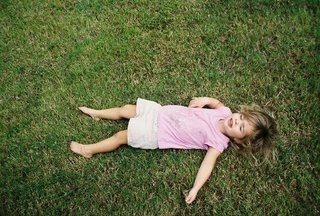 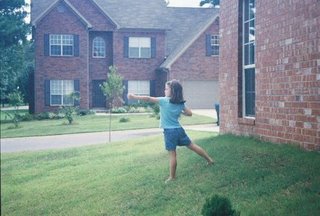 This is part of our "front lawn dancing" ritual 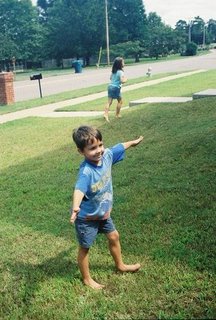 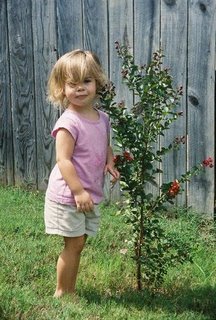 This is part of some game they play. It involves Emmie going to sleep. Notice the blanket - that's right, Logan's blink made a comeback. 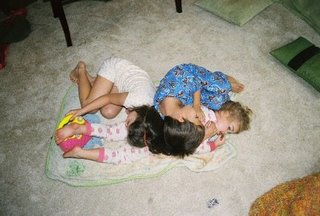 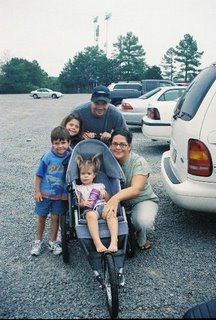 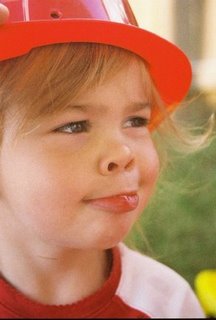 building a rocket - it's serious stuff 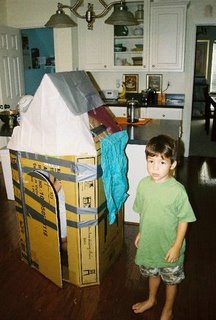 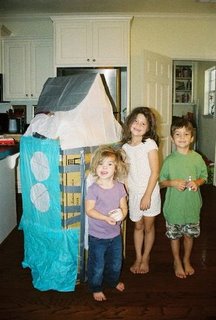 Just part of my daily entertainment... 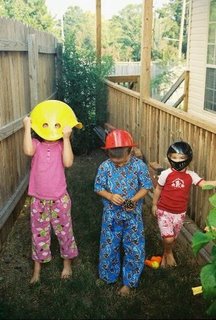 This is my girl 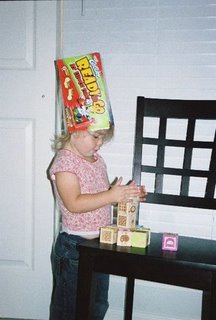 I had Emmie to myself last night for a bit while the kids where at Awana. (She cried for a few minutes that she doesn't have a class...)


Today I tried a new recipe - "Chipotle Mashed Sweet Potatoes" - and while I liked it (as did Jeff) the children did not. Not originally from this region, I really had no idea how spicy these little chipotles are. I followed the recipe and hadn't tasted it yet (although my first clue should have been that a spot on my chin was burning were I had touched it with chipotle-laced fingers but I didn't know that was what it was from) when Emmie spooned a big bite into her mouth and then yelled and grabbed her tongue. I didn't make her eat it.

This is a typical school day! Except that here Em hasn't dumped the crayons yet. 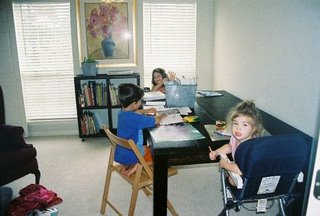 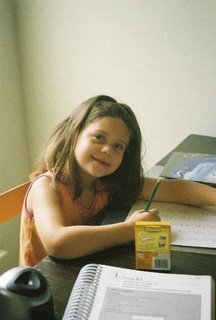 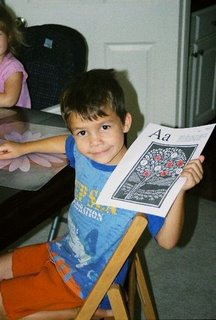 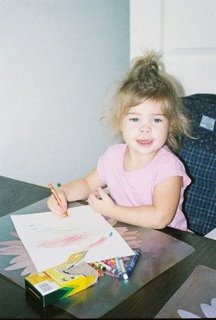 Last night Emmie had an emotional meltdown, captured in these two sentences (crying), "I just don't want to talk right now! I just want to be alone!"

Sunday we had a baby shower here for Spring, and Logan (very cute in his little tie that he left on most of the day) was told to stay upstairs with Dad and Em. I found him on the steps crying because he just wanted to come to the party. After trying to talk him out of wanting to come down, I let him come in and watch Spring open some presents. He leaned toward someone near him after watching for a bit and said "They're not all going to be shirts, are they? I know they can't all be shirts!" Not very exciting to the little buddy.

Riley lost another tooth - I need to get a picture of this. Her other front tooth hasn't dropped down and so it's a space, a tooth and a space. When she grins it's kind of funny and cute. She didn't want anyone to pull it and I promised I wouldn't as long as she didn't want me to. But it was just hanging and starting to really bother Jeff, so the other day he said "just pull it!" and she freaked, and having promised I decided to compromise. I offered her a dollar if she'd let me just yank it out - she's into money right now so that worked. Plus she got to put it under her pillow for the tooth fairy.

For God so loved the world that he gave his only forgotten son - according to Logan.

Riley walked out of Kroger this afternoon and said, "Wow, it's just like winter out here. I mean it's really chilly." (It's 80 degrees.)

Yesterday in the van, Emmie was yelling at Logan (I think he was kicking her seat or some other older-brotherish trick).


We're in our third week of school. It's generally going well. Juggling them is a bit of a trick, but if Emmie's happy then we're all happy. She gets little worksheets to do (and knows several of her letters) and enjoys things like matching same objects, picking longest or shortest, and doing simple mazes. She's pretty great.

Riley's favorite thing is probably the book we're reading right now - Baby Island - for her reading and comprehension. It's a fun story about a ship that goes down and two little girls have to take care of four babies on a deserted island until they are rescued. She's also starting a journal (I get ideas from Hannah Senn), filled with stuff like "I like my friends. I like soccer."

Logan zips through all his work. Math is a breeze, reading is a breeze. He really likes the books about mummies that we got for history this year (Old Testament/Ancient Egypt). Except that going to bed last night he was all worried about how they made mummies - "did they push that fuzz into their mouths and everything?"

So the challenge is to keep stuff for Emmie to do - right now she's roaming and looking for trouble.

Along the musical line, Riley dreamed of being in the "Laurie Berkner Band" the other night. She was so excited when she woke up, and said, "I was really singing and everything!"

Yesterday we were working on Riley's spelling.

Sunday night I went in Logan's room to tuck him in and he pulled me down beside him and said: