I'm listening to Logan talk to my Mom:

"VBS is the funnest day ever! You get to do all these crafts and you even get to make a book. We're doing VBS about Narnia and there's even turkish delight which is in our daddy's office I didn't like it but my sisters did. There's some more turkish delight in another box well there's two boxes but we didn't taste that we just tasted the rose kind and it was kind of gummy covered with white flour I think it's flour or sugar or something. And maybe you could come to our VVS. I'll ask if we can save you a piece. (And Mom, can Grampa have some too?) Yeah, Grampa can have some too. And where are you right now...(pause)...it's just that in our school stuff there's some stickers and I can make you something and send it in the mail if my mom says I can."

So my whole life right now is vbs. (What's vvs, momma? - Em) My poor children. Riley has been very concerned that I get it all planned - because she wants it to be fun. Maybe this year Logan won't pretend he's not enjoying it.

I was writing some discussion questions for the small group leaders today and read the part where Edmund sacrifices himself to break the witch's power and got all choked up. It's a great story, and I think the kids will love it.

Now I need to re-do the schedules and other various junk.

I just whacked the TV on the side because it was messing up, and Emmie immediately says, "Mommy did you spank the TV? You spanked the TV, you didn't spank me!"

The other day she wouldn't come to me (for the big nasty diaper-change) and I said "Logan, drag her over here." She started towards me saying, "No, don't drag me, I'm dragging...[then, right in front of me] I dragged!" I don't know which is worse - that she's like this or that I think (being a grammar freak) that it's kind of cool. It reminds me of when Jeff comes in from his garage office-hovel when studying and gives the rundown on some obscure fact of Greek syntax.

So just now (Sunday morning - I've been up forever this week as opposed to last when I had the benadryl fiasco) Logan came down (mellow and n0t-awake, that's his morning M.O.) saying "I had a bad dream!"

Me - oh, I'm sorry. What was it about?
Logan - I don't want to talk about it.
Me - that bad, huh?
Logan - Yeah.
Riley - Logan, sometimes it's good to talk about it. You'll feel better. What was it about?
Logan - a green man. And he was chasing me and pushed me and I fell. For real.
Me - You fell out of bed?
Logan - No, in my dream I fell for real.
Riley - and you really felt it?
Logan - yes
Riley - and when you woke up did you check all around and check under the bed and in the closet?
Logan - yes
Riley - I had a dream once about an ice cream cone and I really grabbed for it I really did in my sleep I really grabbed for it.
Logan - (flatlining)

Riley and I enjoyed about 5 minutes on the back porch together, talking about nothing really, just enjoying the morning, rocking, drinking my coffee, listening to birds - then she got scared about a "bee" that was a fly of some type, jumped up flailing around and backed into my coffee, at which point it's pretty much over (coffee all over me, the waste - appalling! [just kidding]).

Speaking of peaceful moments being over, mine is over now. 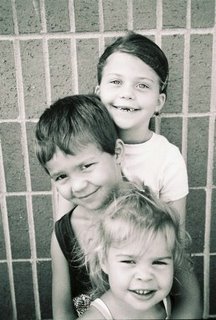 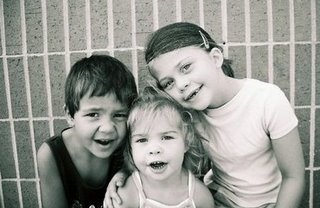 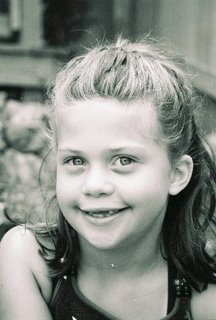 This is the look seen most often since daddy's away 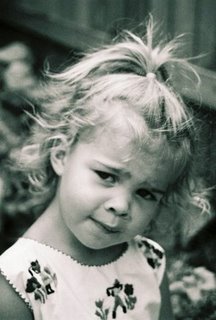 how could I not be in love with this? 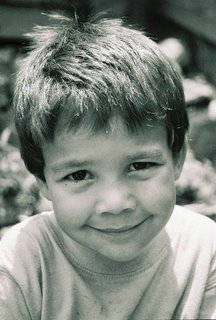 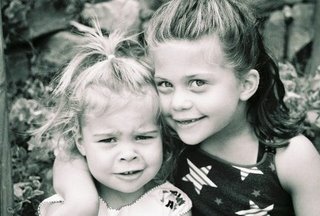 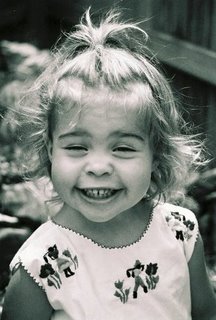 I know, there's a booger in her nose, but look how beautiful she is! 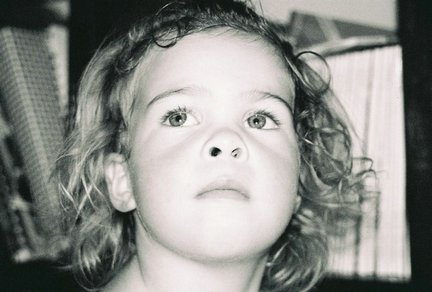 Emmie, at dinner tonight, out of the blue - "Grommit is the dog." (talking about Wallace and Grommit.)

At lunch just now I was talking to Riley about how we don't talk to our friends while we're sitting in church, and how we need to listen. She heard me out as I gave my little speech then said, "I wish God gave us super-ears, then we could listen to the teacher and still talk to our friends and have fun in church, and then when the teacher asks a question you can still answer it." 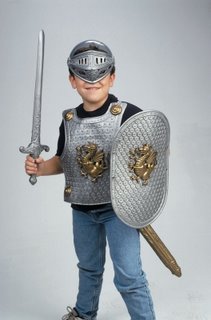 Logan has this toy shield. This picture is not Logan. It is for demonstration purposes only.

The back of this shield reads:

"Warning! This is a toy. Does not provide protection."

"Caution! The simulated protective device was not safety device and offered no protection. made in china"

I liked both the obvious grammar issue and the fact that they needed to clarify that it won't provide protection.

Now and then we ask Emmie basic Q/A stuff about God. One of the latest:

See, this is why I don't like the fourth of July. I've had my set of bad July 4th memories before, and here comes my newest, perhaps my best reason to avoid celebrating.

We had a great time watching the fireworks. The kids (Riley and Logan, at least - Emmie fell asleep on the way, stayed asleep through multiple transfers from vehicle to Mom to stroller and then back again not to mention loud siblings, rain and very loud fireworks) had a blast playing with Aaron Job and Abby and watching the show. Upon Jeff's suggestion I purchased an unusual amount of junk food (side note: when I returned to the van from buying the junk food Logan asked me what I got and I said "Twinkies, for one thing" and Logan said "what are Twinkies?" so you know I don't usually get some of this stuff) and some cokes and Riley and Logan ate their fill.

As soon as we got in the van Logan's stomach hurt, but he fell asleep in the hour it took to navigate the few miles home. Riley frequently mentioned her stomach hurting - even going so far as to remark that she wished she hadn't had that coke (they never get real coke - usually just something non-caffeinated) and next time she wouldn't eat that much or drink that much coke.

Got home, carried limp sleeping children to bed, put Riley to bed, went to bed. Minutes later heard much groaning. Got up, went to Riley, sent Jeff down for Pepto. Thinking at this point is on level of an insect - pure function, no rational thought. Administered Pepto, and watched as Riley burped then proceeded to vomit. Jeff grabbed first container he could find and caught half the puke as the rest of the chocolate-and-coke gunk spewed across the white carpet (at which point I watched in an out-of-body experience and thought, I might add, of the moment when Jeff chose the color of the carpet.)

Did I mention that the container was full of Polly Pockets and other teeny tiny dolls with teeny tiny accessories? Like Polly's two-centimeter shoes and thermos and purses? So after seeing that Riley got to the bathroom to sit on the rug and await futher puking, Jeff started cleaning the carpet and I started to sort out Polly Pockets from puke chunks. Started to gag, took a brief break to violently empty my stomach, continued to sort. Soaked Pollies in baking soda and other various cleaning products, put above mentioned child back to bed, put an assortment of affected clothing items and stuffed kitten in the washer and sat down to record my latest fourth of July memory while it is clear in my head.

Did I mention that the only thing Jeff thought to grab for my sick child to puke in was a container of Polly Pockets? With all their tiny accessories? Like teeny shoes and boots and radios and purses and cups and other what-not?

Riley seems fine now, by the way. Apparently just needed to get rid of the junk food and is sleeping peacefully. I'm going to bed.