the effects of sunday school

Today I had to purchase diapers - not a big deal, but Emmie knew that they were new...

When I opened the package I handed one to Emmie to hold, and she said "look, my new diapers!" and then proceeded to sing (to the tune of "He's Got the Whole World") "He's got my new diapers in his hands," the whole way through.

the effects of verse memorization

Yesterday Ri was working to finish her awana book - she had to say Psalm 23 and three other verses, and was working really hard (for like two hours straight - major focus for my girl). So as she's saying Psalm 23, she paused for a second and Logan jumped in to tell her the word, and she says "Stop interfering with me, Logan! 'Interfering' means don't mess with me." I was impressed that she used the word, and defined it. 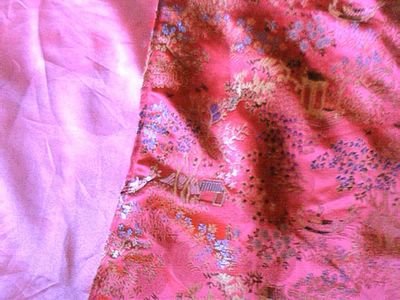 Emmie lost her blanket again, so this is the replacement. I made it the other day - Jeff just rolls his eyes at me for feeding her habit, but she won't be a baby forever, right? I like it. 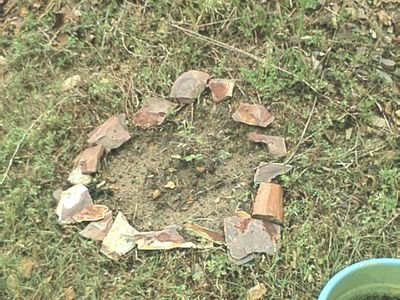 My neighbor Sunita brought me three tomato plants and helped me plant them! I'm excited. I told her my dad would be proud. 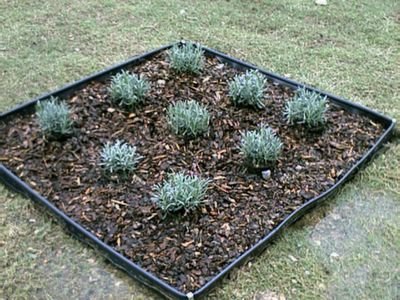 My latest gardening project. The plan was to put in several of these in the side yard. We'll see. It kind of took forever since under the sod there's basically just rock to dig out. 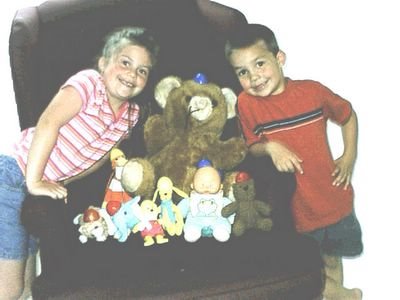 They're playing "family reunion." This is the family picture. They put half an Easter egg on all of the heads. I'm not sure what that's about. 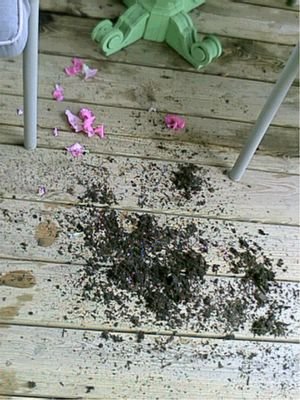 This is how Emmie told me she had had enough play time with the big crowd and was ready for a nap. Maliciously ripped my petunias apart! My sweet Emmie!! 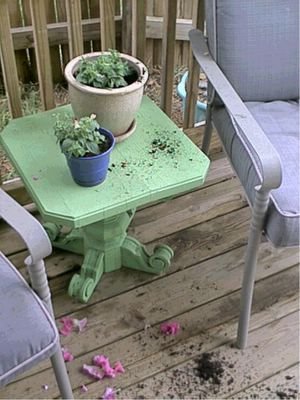 I believe the word is "denuded." 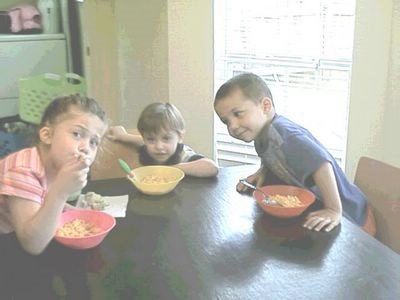 Xander and the Wilson kids were here - I forgot to get a picture of all together - but they had fun! 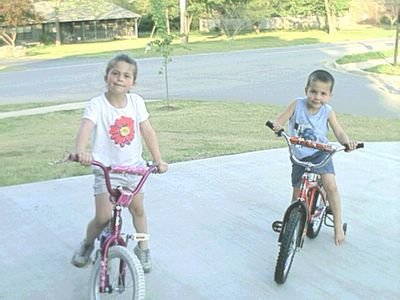 This stuff is specifically for my Yankee fam - it's been summer here all month. Sorry - you're still pretty much snowbound, eh? 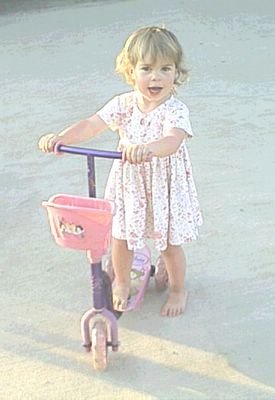 Emmie can ride the scooter! 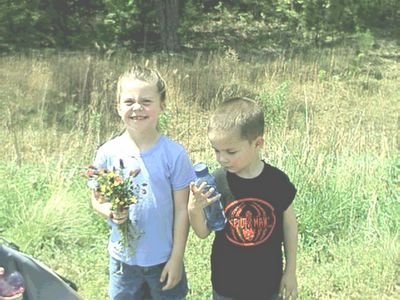 We went on a big walk the other day. Riley picked flowers; Logan picked bugs (there's a big stinkbug or something in his bottle.)

Emmie last night at dinner looked at me and said "this is the most delicious I ever ate!"

Emmie - (wanting a "show") - I want Bigfoot. Can you turn Bigfoot on? (I have no idea where she got this idea.)

In other news, Riley continues to play and love soccer, and keeps track of her goals - including those from last year. She is so much fun to watch. She loves it so much, and even when she falls she pops up with a grin on her face and keeps running. She reads to Emmie sometimes, and it's the most precious thing ever.

Logan is my budding engineer. He'll ask me for wood (or on a few occasions brick or other building material) to make things, like a plane or something. This child - at two - told me he needed rubber bands to make "a contraption." He draws constantly - rockets, cars, trains, robots. And he cried yesterday because I wouldn't let him "do school."

I go on and on about how smart Emmie is. I know I do. Here's an example of less intelligent convo with Emmie (today in the van.)

Logan was watching something "scientific" on tv this morning. All of a sudden he said, "Did scientists invent everything? Did they invent trash cans?"

We heard this afternoon that my sister Ginny came through her surgery, the tumor is benign, and they took only a little of her kidney out (nothing else, as had been feared.) Praise the Lord!

When I told the kids, Riley threw her fist into the air and yelled "YES!" And immediately said, "so she'll be okay to come to the beach in June?" 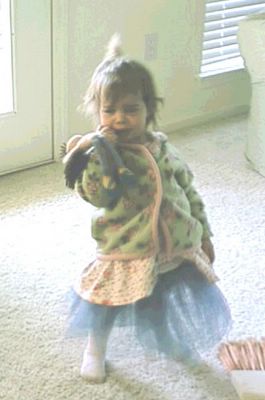 Emmie's had this little tutu under her dress for about an hour now. With jacket on. She looks kind of like a homeless princess.

This afternoon Emmie kept bringing me flowers (weeds, wildflowers, whatever you want to call them) and she'd present them to me saying "Momma, it's flower time!"

We decided to tell the kids we're expecting, so we sat them down and Jeff said something like "You're going to have a new baby brother or sister." Emmie yelled "HOORAY, HOORAY!" Riley and Logan looked slightly stunned but happy. Immediately there was great discussion as to whether a boy or girl would be preferred. (Riley and Logan want a brother, Emmie wants a sister.) The rest of the day Emmie kept yelling "we're gonna have a baby-sitter!" So I don't know if she's really got the concept down...

The other day we were turning onto Taylor Loop when Emmie looked at a guy in a truck who looked like a wild hillbilly man with a crazy beard and she said "Did you see the lion driving, Momma?"

Logan said last night, as I put on the CD they always go to sleep to, "I'm so tired of this song. It sounds like a beetle singing with an ant band." And proceeded to demonstrate with yowling.

Update on Emmie's fear of all trucks: today the trash truck came and she (once again) ran crying and screaming "Save me, Momma, save me!"