Crotts kid #4 looks about like this right now. A leaf-baby. I'm still in shock - but excited shock. 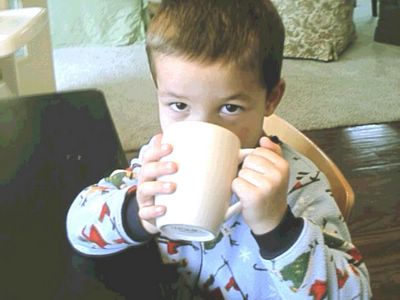 Logan just wants to be in the club. He doesn't usually really drink his coffee. 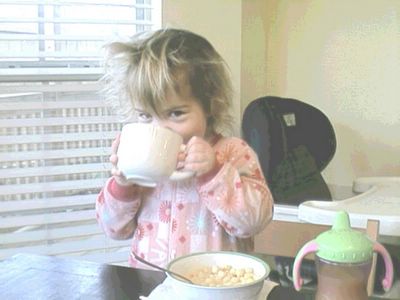 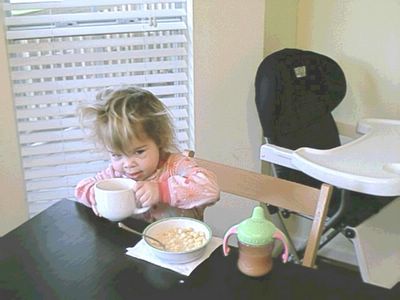 Even Emmie gets a little...check the scraggly 'do. 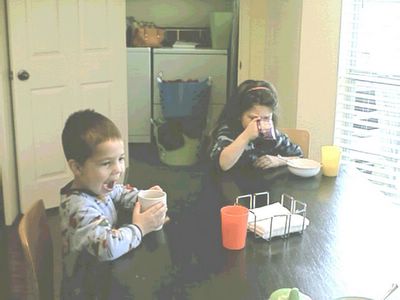 Thursday mornings can be a little ragged around our house after getting in late Wednesday night. Coffee all around! (Really, it's mostly milk.) 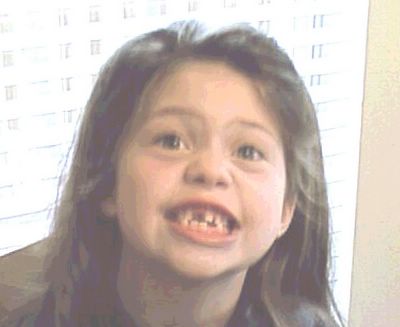 Riley lost another tooth. I was out, and so she yanked it herself (Jeff said she was determined not to wait till I came home.)

Emmie today in Walmart: "How 'bout we look at the shoes, momma?" (we looked, but she kept telling me she didn't like the ones I tried on her.) She was looking at boys shoes, and said, "How about those, mom?" I answered, "no, those are big boy shoes. We need little girly shoes." She immediately starts singing "girly, girly, girly in the morning, girly at noontime, girly, girly, girly the whole day through!"

She just woke up from her nap and said to me "how 'bout we go out for lunch, momma?" 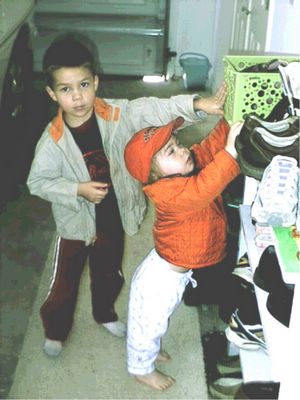 "I can do it by myself!" Emmie's battlecry. Here she's getting shoes on. 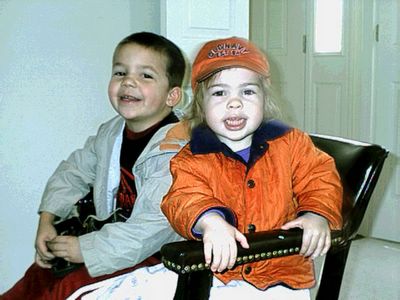 All day I was really impressed with Emmie for something, and I just figured out that I ought to be even more impressed...

To explain: Earlier today we were outside. Riley and Logan were riding their bikes, and Emmie was sometimes riding her tricycle, sometimes wandering around poking her little finger into various things on the lawn and in my little herb garden. At one point, since I didn't want her to wreck my little herb garden I said to her, "Emmie, get out of there, that's my garden." She replied, "Oh! I wish I had a garden."

Then, she seemed to think for a minute and said (seemingly at random) "You're Frog and I'm Toad. Hi, Frog." I played along, (impressed that my 27-month old could pretend and role-play at this level) "Hi, Toad." So she says, "Where's my garden, Frog?" And I played along, just making stuff up and being silly with her. This went on all afternoon - same conversation, different places through the house.

Just now I was thinking about how persistent she was with this little scenario, and thought about the Frog and Toad book, looked at it and sure enough, one of the stories is called "The Garden." Frog has a garden, Toad admires it and says to Frog, "I wish I had a garden." Then proceeds to plant one...

Is she, or is she not just too much?

quote of the day

Riley while watching chocolate chip cookies bake in the oven just now - "Watching cookies is just as much fun as watching tv. Or better. It is to me, anyway." 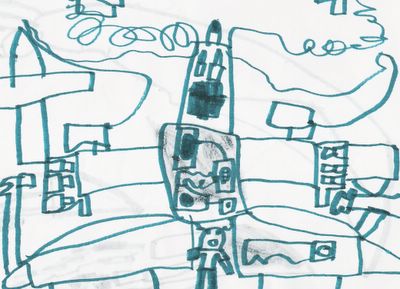 This is one of Logan's recent robot creations - look closely for these details: little boy running from robot (front bottom center), guns coming out of robots head, hammer in one hand and saw in the other, details of buttons and other robot-stuff.

We were talking about last night's awana lessons just now, and Riley was giving her thorough recollections of what "Mr. Jimmy" taught, including illustrations and drawings.

Logan interrupted with - Mom, is God the Church?
Me - No.
Logan - Is God everything?
Me - No, that's called Pantheism. But God is a spirit, and he is everywhere.
Logan - What's a spirit?
Me - Well, in a person it's the part of you that thinks and loves other people and ...
Logan - And if you're good enough you get powers. Superpowers, right? Maybe. I think.

Logan comes to me for ideas of what to draw.

Logan - Mom, what should I draw?
Me - How about, (I look around, seeking inspiration, and see in my open cabinet a can of beans) how about a cowboy with his horse?
Logan - I don't know how to draw a cowboy.
Me - Okay, how about a pirate ship landing on a deserted island to bury a treasure chest?
Logan - Okay!

So how is that easier to draw? 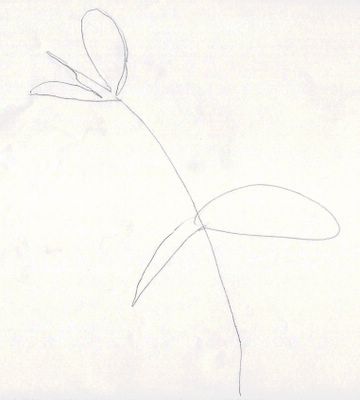 Emmie just asked me, "Momma? Can I have coffee? For real?" It's nearly ten at night (I know, why is she even up, and why am I drinking coffee this late - that's another conversation.)

Other recent quotes from her:
"Here Momma, I brought you your clip-clop!" (my hair clip)

"Oh, Momma! Don't spill your coffee! And don't bump your head!" (as I carried her down the steps today)

"I'm super-Emmie!" (holding her blanket out like a cape)

"Oh, I have beautiful eyes!"

Yesterday:
(Running in from the back porch) "Momma, momma, save me! There's a monster truck!" (She has overheard Logan's recent obsession with monster trucks.)