the mind of a 6 year old

This morning it was about 65 degrees outside, and we (the kids and I) were out on the back porch. Riley turned to me and asked, "mom, can we have hot chocolate?" (The irony of which is that as soon as it dips below 70 degrees they think it's downright cold out.)
"No, not right now."
"When?"
"Maybe later."
"Why is it called 'hot chocolate'?"
"Because it's hot."
"Why?"
"Well, because it's chocolate and milk, and it's warmed up."
"But why is it called chocolate?"
"Because it has chocolate in it." (I'm trying not to say it sarcastically now.)
"Like little chocolate candies?"
"Uh, kind of." (Do I really want to explain what cocoa powder is right now? I don't think so.)
"Wow! Now I get it - 'hot', because it's hot, and 'chocolate', because it's chocolate! Thanks, mom!"

And that, folks, is the mind of six year old. 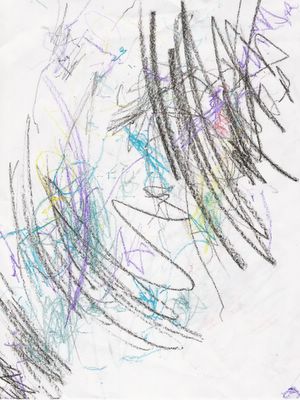 "Emmie color in'ere!" - her response to seeing her scanned-in picture

"I color dubbulyou in'ere! My green! My oran! (orange)" Emmie is into coloring - she can do circles, scribblings, dots...and her favorite letter is "w" so if anything she does looks like a letter to her then it is "w" of course. Now she's saying "I color bunnyrabbit! I color water!"

Yesterday Emmie brought me the little bouquet of flowers that go in the bathroom saying "Mmmm-mmm, i-keam cone!" It is cone-shaped.

Logan sat down to color a few minutes ago and he said "I'm going to create a masterpiece!"

Last night after awana we were in Jeff's office and the kids each had a piece of candy. A little boy was outside the door and I overheard Riley telling him about how they each had a piece "except my mom because she's losing weight." They tell everyone everything, don't they?

I cut my hair last night. Logan said (looking at the result) "Oh Mom! Everyone will laugh at you! Can you put it up?" Riley told him he wasn't being nice...

Emmie said "it all gone!"

Emmie sings "The eensy-weensy spider" now - it's too cute. 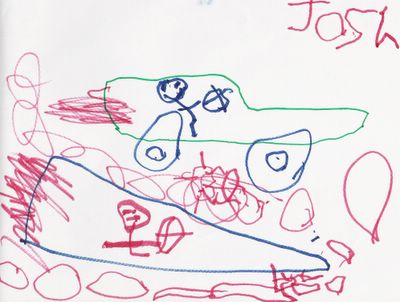 Logan drew this for Josh (note the name - he copied it from my writing it on another sheet of paper). According to Logan, this is two cars (with guys in them) and the red car is shooting (although not specifically at the green car). 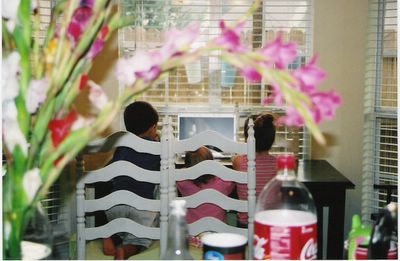 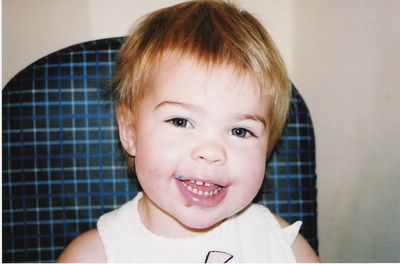 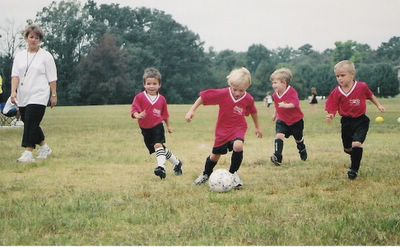 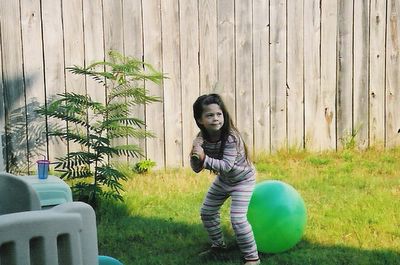 Riley loves to bat - check out her stance (Dad is pitching) 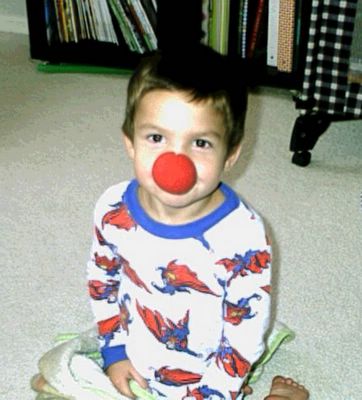 Last night we went to "Shoe Carnival" which is supposed to be an enjoyable way to shop for shoes with children, I guess. Designed by people who don't have children.

Anyway, at the check-out counter the shoe guy gave Riley and Logan clown noses (see below) in spite of their behavior.

Other Emmie-made adjectives include (when it rains and our van door rattles as we drive) "It a wiggly noise, mamma!" 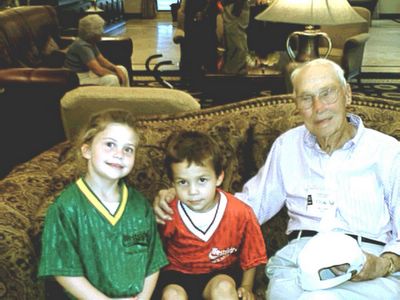 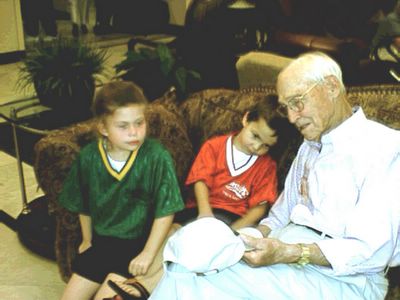 Uncle Clyde was a hit with the kids 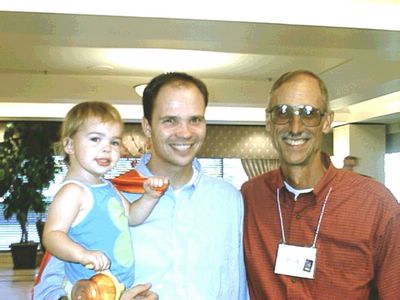 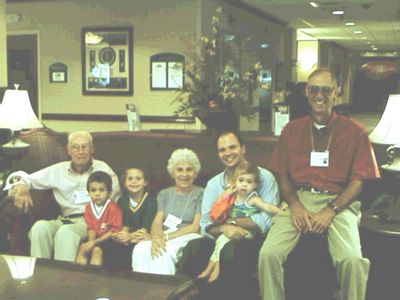 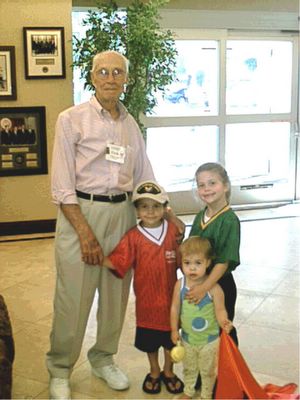 Great-great-uncle Clyde with the kids (Logan's wearing his hat)

Jeff caught a praying mantis the other day. Riley called it a "trying mantis" for a while, also a "tri-mantis" which is similar to a "tri-antula", I think (she still calls tarantulas that.) They let it go today because, according to Logan, it was dying.

Logan is my little engineer still. He's always trying to make stuff with rubber bands and scraps of things. He designs buildings when he plays with blocks, and when he colors it's rockets and fire trucks and race cars. Total boy-o. He split his lip open on Friday - he was running through the house, I was just about to tell him to stop when Riley came around the corner...thirty minutes later we're at the pediatricians trying to see if he needs it stitched. (He didn't.) It resembles a hamburger.

Emmie is talking like a nut - in the car tonight she was chattering and said "a-b-c-8-9-10." She can count to ten, has (at least once) counted to twelve. She's only 21 months! Her latest craze is that she wants to play the computer games Riley and Logan do - Logan left the computer today and she said "Emmie pay game, Emmie do it" with her hand on the mouse. Among other oft-repeated phrases is "cut it out, Logan!" and "Lo-lo, where are you? Wiwey, where are you?" She follows them around (often right into trouble.) 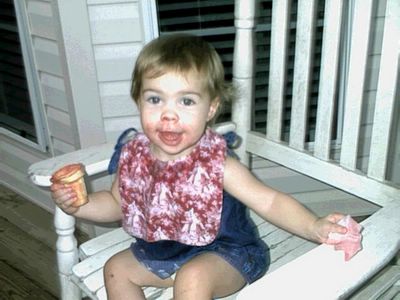 Emmie with her "i-cone i-ceam" rocking in bliss (it's not blood, it's ridiculously colored red blue and yellow "superman" ice cream) 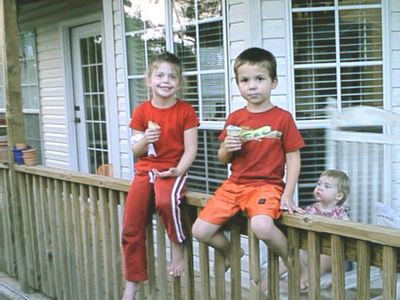 they had "ice cream specials" (according to Logan) - in cones, with sprinkles - tonight (that's the beauty of digital - take the picture, put it online, and grandparents scattered across the East Coast have instant gratification!) 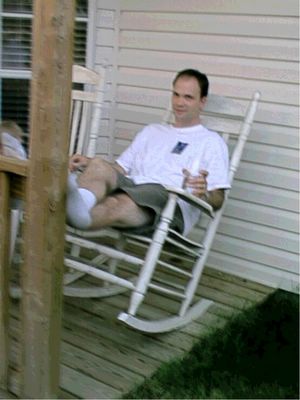 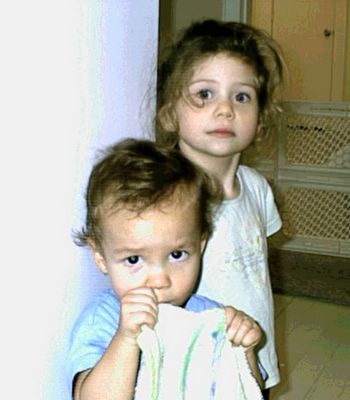 This is nearly three years ago...the "blink" is still with him though.

Our church is involved with helping at a camp not far from here where about 200 refugees are staying. It's hard to believe there are people who have been evacuated all the way up here, but there have been estimations made that up to 30,000 hurricane refugees will be in Little Rock. It's unbelievable. 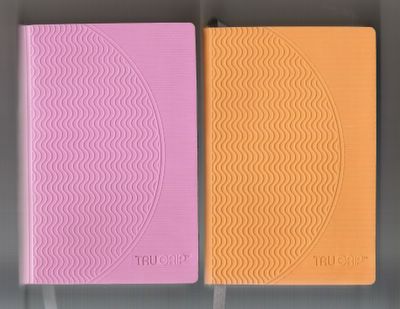 We got them each a Bible (except Emmie whose verse is still "Thy words were sweet and I did eat them"). ESV, about 4'x6', and they're pretty stoked on picking out their own colors. Don't make me point out what ought to be obvious as far as whose is whose. Logan cried because he didn't get to "use" his on Sunday. 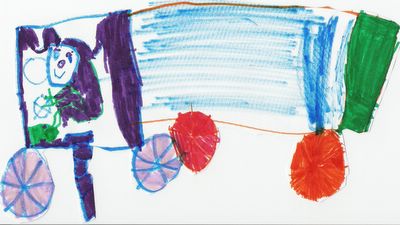 Riley drew this and cut it out all around the truck for Logan - "here Logan, I made this for you" to which he responded "uh, it's okay, you can have it Mom." Riley then clarified, "no, I made it special for you, Logan." "It's okay, Mom can have it, I don't like the girl." It's a girl driving an 18-wheeler... 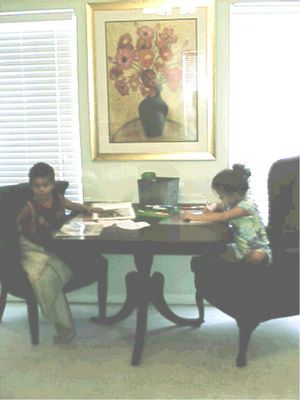