Logan had a great day, enjoyed himself immensely, and generally was sweet. We started of by going to Krispy Kreme (still a relatively new thing to Arkansas and a novelty to the kids) at around 7:00 this morning (with kids in pj's.) Then present opening followed by major sugar high. They all had a great day with Logan's new stuff - with the exception of Emmie's aversion to his new radio control truck. She pretty much hates it. Emmie doesn't really like for the toys in her world to start moving by themselves. Riley had fun - she's not above playing with army men and cars and trucks for the day, especially when it's all brand new...

I have Birthday Headache. 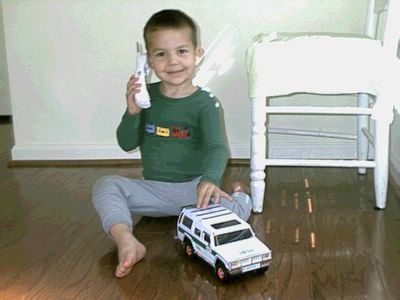 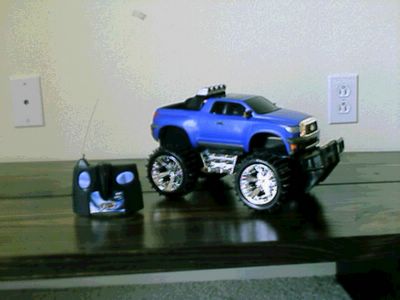 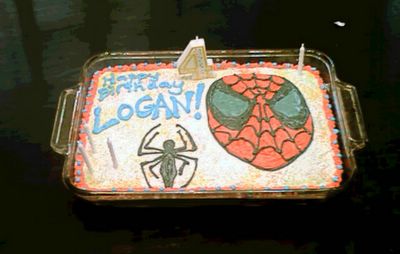 Logan's four! He wanted a cake with toys, robots, and dinosaurs and also wanted a general "spiderman birthday" so here's the cake...

We survived another hot Arkansas spring day. I don't really know the temp today (my dad does I'm sure from the weather channel news...) but it was hot. Walking into Target, Logan said, "Can we hurry inside? I don't like being out here in this hot!" He really doesn't like to be out in the heat at all. He and Ri played outside for a little while and came in all red and sweaty.

Emmie is really putting sentences together. This morning she had been out on the back porch with her blanket (okay, she's attached to hers as well) and left it there. When she looked out the window a while later she let out a scream and ran to the back door - I said "what's wrong, Em?" and she emphatically replied "I want my ni-night!" She also asks for my cell phone all the time "hone? Hone?" and still compulsively brings me my shoes if I'm barefoot "he-ya-go, mom, toe."

We've started reading The Lion, the Witch and the Wardrobe at night with the kids - they love it. We read George McDonald's The Golden Key and had just finished it, needed something new and thought they might be old enough...they love it. Logan was telling one of his friends about it at church on Sunday, referencing the story and saying "what's that land called, mom? Yeah, Narnia!" They are soaking it up.

Riley dressed Emmie today - first time. Mostly by herself. Was very proud of herself. Emmie cooperated with her pretty well. Mostly. Emmie has realized that Riley can be very useful - Ri likes to share food, read stories, and play "wosy" (Ring around the Rosy) and while sometimes Riley picks her up when Emmie doesn't want that, Riley is generally fun. Emmie still has her guard up when Logan trots by - probably because a lot of times he's after something she has (hoping to switch some toy he doesn't want for one he wants that she has, a trick that worked when she was about six months old but hasn't worked for quite some time - he just still tries though). She loves him though, and loves to rub his head (he has a buzz cut right now.)

Logan's stoked for his birthday to come. Every day he's counting down till he can be four. I know it's crazy, but I'm sad to lose my three-year-old buddy. He looks so big already - he seems like he's just gone through one of those growing jumps where he looks really different. I'm glad we'll get to see all the g-parents this summer and lots of other family too. It's cliche-ish, but the kids are changing before my eyes. I hate that we don't get to share it with our families! They are so precious, and I enjoy them so much. We'll enjoy having them around all of you we'll be seeing this summer. 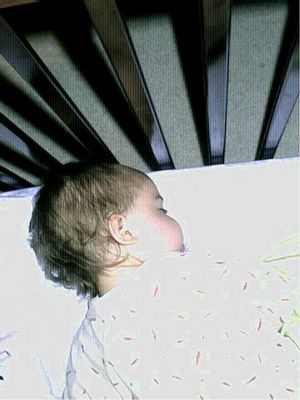 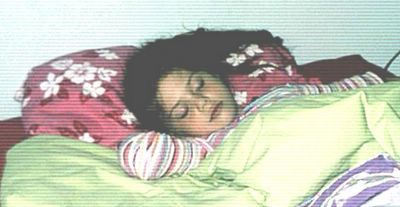 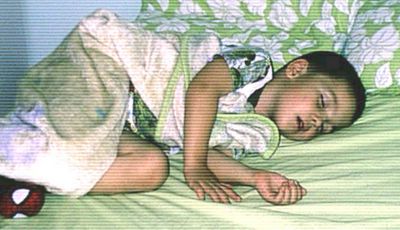 note: the blink lives (longstanding name for his blanket)

The Logan-buddy is doing great. He used the word humongous in front of our neighbor tonight and she couldn't believe it. He's incorporated large words very naturally into his vocabulary since oh, about eighteen months. I read recently where at two he said to Jeff (after Jeff cut himself shaving and had little bits of toilet paper stuck all over his face) "I'm just fascinated with that white stuff on your face, dad." He's excited to turn four next week and is convinced that I'm getting him a robot (which I've never confirmed or denied.) He's also convinced that the tooth fairy is very real, although his faith in how wishes work is wavering a bit since Riley's wish for a Golden Retriever didn't "work" (she really expected on under her pillow.) He wanted her to use this wish to get him a remote-control dump truck full of candy.

Emmie is chattering. She's seventeen months as of yesterday and sang parts of "Jesus loves me" last week - "baboo tell me ho". Don't know what's up with that last part, but she also says "you" for shoe"... She also said a couple of days ago for the first time (after climbing over my feet and successfully walking away) "Day-ya-go, baby" (i.e., there you go, baby). Other vocab includes buckle, walk, my-do-it (as of tonight when she wanted to feed herself the yogurt), tickle, ee-yoo (when she wants me to smell her feet and say pee-yoo), I wuh you (I love you), home, she recognizes the way to the park from nearly a mile away and says "weee" (for the swing and the slide), wow-ah (flower), and other stuff I can't think of because of the fact that I run around after babies all day and it's 10:21 at night...

Yesterday Riley's other bottom tooth came out (with help from me.) She said "mom, look at this" and it was sitting sideways in the middle of that two-bottom-front-tooth space and I just couldn't leave it alone anymore. So I got her to let me yank it - right before church. She was so proud of herself. Of course, the tooth went under the pillow, and I waited until she was asleep and then let Jeff do the honors of replacing it with money (we're keeping the cash flow low to start - it's fifty cents at tooth). I was gone this morning when she got up, but Jeff said the first thing she said was "awwh! I wished for a Golden Retriever!" Then she got over her disappointment and promptly shared a quarter with Logan - which is, to me, remarkable. She loves him! We had to read Robert McClosky's One Morning in Maine last night. I love that story anyway - the pictures remind me of "home" - when I was a kid - but the funny part is where the little girl loses the tooth and can't find it. Riley thought she lost hers, and thought she wouldn't be able to put it under her pillow and she was, briefly, devastated. Then found it - and there was great rejoicing. 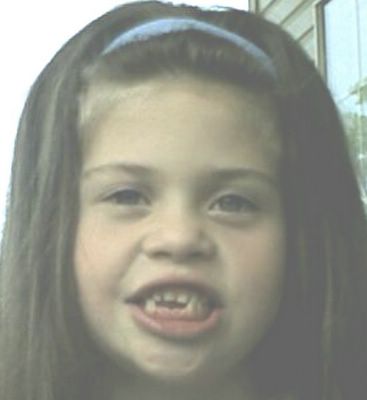 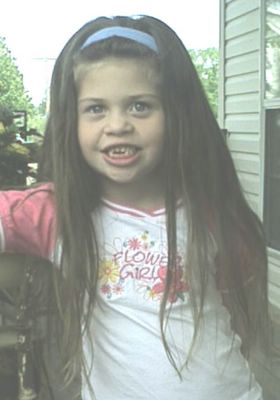 We went to the police memorial yesterday at the capitol building. The kids were impressed most with the mounted police - one guy's horse was freaking out. Riley drew a picture...(below)

Emmie didn't want to go. How do I know? As we were pulling out of the garage she began to fuss (not very Emmie-like) then started saying "no-no bye-bye! ni-night!" which, being interpreted is to say: Mom, Dad, it's actually my nap time and I'd prefer to go to sleep than to go out right now, if you don't mind. Yes, she actually does ask to go to bed (at not even 17 months.)

We have new neighbors, and the Friday night (the day they moved in) the kids both prayed "thank you for our new neighbors to be our friends" - they're excited. The neighbors' kids are 5, 8, and 9, and so far everyone gets along great. Except for Logan putting sand in Ashley's hair yesterday... 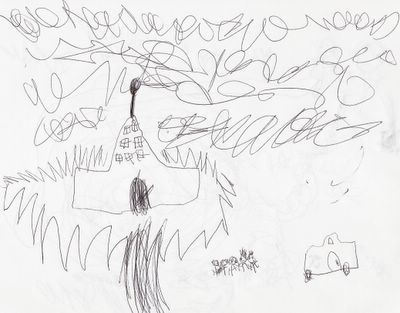 Riley's rendition of us at the state capitol building yesterday