Today was Riley's last soccer game for the season. She really started to get the hang of it - her coaches were great. She played hard today and had some good shots.

Logan is getting so grown-up in many ways - though he still always knows where his blink is. One of his few baby-isms is that he calls Vanilla Wafers "vanilla wipers," Riley always tries to correct him but I always stop her. Another kick he's on is that he wants "candy snacks and healthy snacks" - and in the store wants me to buy (probably because I've been on a sugar-free kick) sugar-free candy. Or will say, as we pass the ice cream aisle, "mom, ice cream doesn't have too much sugar, does it?" I hope I'm not warping the poor child.

Yesterday I was doing something in the attic room and Logan was under strict orders not to come in (he was standing in the doorway) when I turned my back for a second and he stuck his finger in a mousetrap (which closed on his little pointer finger.) He's fine, by the way, not even a bruise - but I don't think he'll do that again soon.

Emmie's a hoot. She stood on the sideline today clapping and yelling "yay Wiwey" for Riley at the soccer game. She says "tickle" to be tickled, and just started to "pray" - claps hands together and says "dee Gott" then "ah-mane" at the end. She's great. Elmo's still her hero. The world stops if he comes on TV.

The tooth has been loose all week, and she's been saying for days "I'll let you pull it tomorrow." So tonight I pulled it (painlessly) and it's under her pillow (so I'm obligated to come through as the tooth fairy - which she doesn't believe in but Logan does). The controversy is that Logan wanted Riley to use her wish (because for some reason you get a wish too as well as money?) to get him a new remote control truck because he broke his already...she said no, but that the next time she loses a tooth she'll use her wish for him. 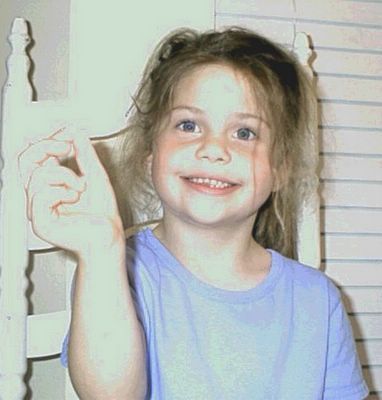 The wedding was great. Jeff was good, of course, but the kids did everything asked of them and more. They were happy, made it down the aisle and back out looking cute as they could...see the pics for yourself. I bribed them hugely beforehand, of course. The night before the wedding I asked Logan what toy he would pick if he could pick anything, and he said "a remote-control truck" so I told him to think about that if he got scared, and after the wedding I'd get it for him. So, after the wedding was over I said "what were you thinking about while you were standing up there beside Hong?" Answer - "I was thinking about my remote-control car."

Went to the zoo today. It wasn't a "Big on Little Rock" day for me. The zoo people always have an issue as I'm going in, and today it was that all of a sudden the lid of my coffee cup might be harmful to an animal. After nearly six years, they decide to press the issue today (after an insane weekend.) Jeff intervened, and I kept my lid.

Emmie still doesn't like the lambs up close, as you can see from the action shot here. We just wanted to detox a bit from the weekend, but apparently it was field trip day at the zoo, so our normally calm zoo was a little crowded. Not so relaxing. Logan likes the new "naked mole rat" exhibit, which I find personally repulsive and unnerving. The little things kept trying to dig their way out of the plexiglass little rooms in a way that reminded me of a Poe short story. 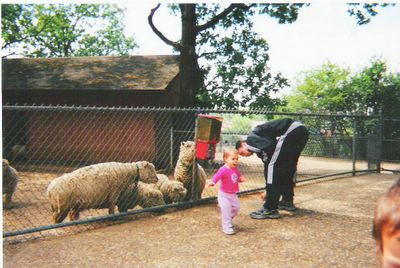 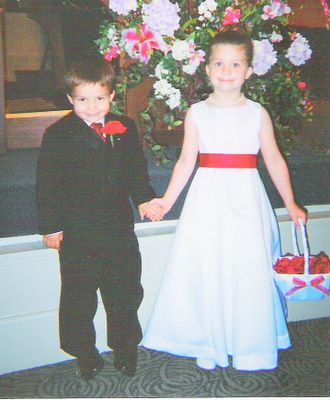 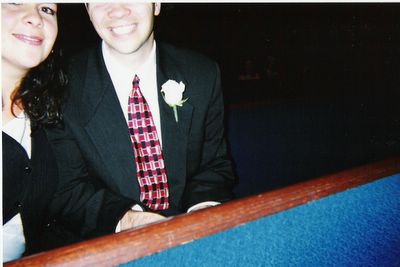 Logan took a picture of us at the wedding 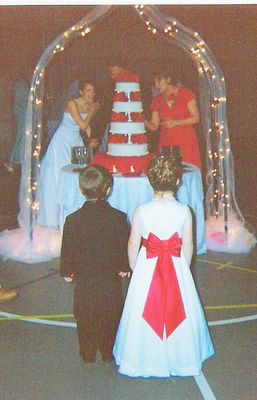 checking out the cake 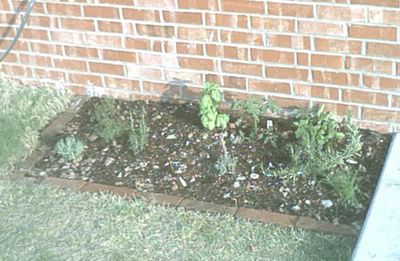 Emmie's first "official" sentence came yesterday - "Read da book!" - as she handed me her new book that I had just bought for her. Jeff was gone all day Saturday for an awana thingy so - like any good mother - after Riley's soccer game I took them to Toys R Us and bought each of them a new little paperback. Logan, predictably, chose Spiderman, Riley picked a My Little Pony thriller (something like "Pinky Pie's Surprise") and I got Emmie "When I Grow Up"(Mercer Meyer). She also said "tickle" after I had stopped tickling her.

Riley's game was a hoot. It was my first experience of parental outrage at someone being too old to be playing (on the opposing team.) All of Ri's team was scared of this one girl who was about a foot taller than everyone else on the field. She would rear her foot back to kick and they would all just back off. Kinda sad. Riley still doesn't seem to notice when her team isn't winning - she still has a blast.

Emmie can dribble the soccer ball (with her feet) down the field and back. She was quite the hit - all the parents were in awe "look at that baby with the soccer ball!" she turned and took it out on the field at one point but the girls were all at the other end, thankfully.

We've been planting stuff lately. Logan had a worm collection from when I was digging - he kept a sharp eye out for worms. I convinced him to let the one last survivor go today. The others were dead and stinky (he noticed they weren't moving but didn't put it together that they were dead yet.)

So is anyone reading this? Just wondering. If this is a failed attempt to keep in touch that's okay - feel free to leave a comment if you're reading though...

today we did the zoo

Emmie didn't really want to go see the lambs. When I let her out of her stroller and said "go see the lambs with Riley" (not in a petting zoo, they were fenced) she said "no baaa, momma!" She says new words every day - yesterday "hand!" with her hand held out for me to wash. Today "poh-coh" for more popcorn (which she liked watching drop all over the floor at Target.) She obsesses a little over my shoes - if I'm barefoot she finds my shoes or slippers and brings them to me saying "Toe! Toe! Toe!" until I put them on...

Riley was observed being kind to Emmie by a stranger in Target. I was getting Ri and Logan Icees and heard a lady say to her little girl, "did you see how she gave her little sister popcorn before taking any herself? Wasn't that kind?" and she was talking about Riley. I said to the lady "and we cling to those moments, don't we?"

Logan still habitually hits his head. Yesterday he fell (or was pushed, depending on who you believe) off the bed and hit it on the windowsill. Today at the zoo he did one of those deals you see happen in slow motion: Logan crossing the hall in the snake room, me pushing Emmie's stroller forward a few inches so she can see the nasty alligator snapping turtle better, Logan not compensating for the stroller wheel, his toe catching the end of the wheel, Logan not catching himself in time, me not able to get there, his head bouncing off the wall (but not, thankfully, the aquarium glass, I guess), the whole room filled with wailing.

Everyone is peaceful for now. At least for a few more hours. I hope. 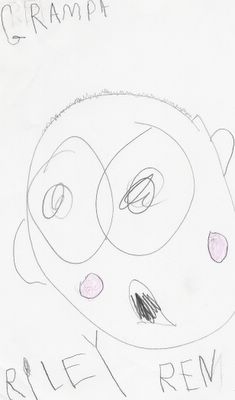 Riley's portrait of Jeff (apparently done after she had been scolded? - and done for Grampa) 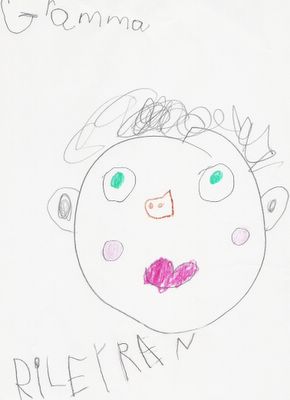 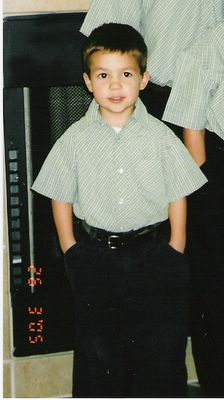 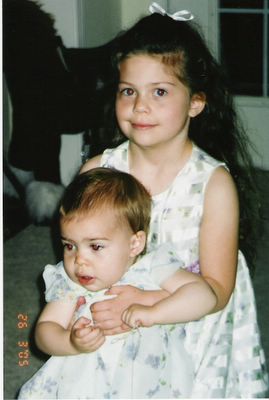 Emmie struggling against an Easter picture

I'm figuring it out

Okay. So I don't really know how to do this yet but bear with me. I think that this will be a fun way to keep up with everyone and share stuff the kids do. Since we are so far away from any and all fam it bums me out sometimes when they draw stuff or I have great pictures of them that I can't just share right away - hence I am trying to make the best use of the technology available here in the year of our Lord 2005.

The kids are doing great and growing like crazy. Emmie is a little wonder. A few weeks ago I went for my wallet and she said "money, money?" with her hand held out. At fifteen months. Is that abnormal? She loves shoes and pretty clothes - I pulled out a new outfit for her this morning and she ran her hands down the front of it and said "Oooh!" with her eyebrows raised. Girly-girl.

Riley loves playing soccer. She got a taste of what a goal feels like and she's amped to play this Saturday. She's reading a lot of words and a few books that have vocab she's learned. She read "combat" and "ransack" on her worksheet yesterday - the longest words she's ever sounded out.

Logan is into bugs right now. I got them each a magnifying glass recently and he carries it around everywhere. He had a meltdown today when a bug he left in his bug box (for quite a few days) had either died or escaped (I really didn't look that hard.) He's a good boy. Still on the verge of babyness but growing out of it so fast.

I talked to an old friend from Master's today for hours. It was really good to catch up and find we are at similar places in life. Thanks, Melissa!

This is an experiment

I'm thinking that one easy way for me to keep all the fam informed on the Arkansas clan is to put stuff online for everyone to access at will. We'll see how it goes, eh?